The English language is so widely used that almost anyone is exposed to it. It is precisely for this reason that Swiss to English translations (as well as many other combinations) are highly sought after right now.

With over 10 years of experience, we have created a network of more than 500 translators. They work on all kinds of translations involving the English and Swiss language pair. To ensure the highest quality of translation we only use certified Swiss / English translators.

Switzerland is renowned for its top-notch quality of life, perfect infrastructure, and environmentally friendly outlook. The key to the Swiss success and harmony might be in the level of diversity in this country. After all, the country has four official languages. 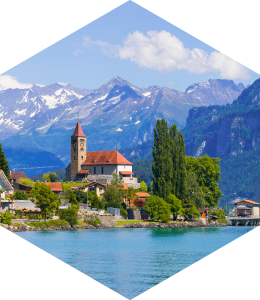 The four official languages are German, French, Italian, and Romansh. Each of them is spoken in different regions.

Swiss German is spoken in the northern, eastern, and central parts of the country, and is spoken by 63 % of the population, making it the primary language in Switzerland. Its speakers refer to it as Dialekt, Mundart, or just Dütsch.

Swiss French is the second most popular language in Switzerland. It is spoken mostly in western Switzerland, covering the cantons of Geneva, Vaud, Neuchâtel, and Jura.

The final piece in this Swiss linguistic treat is Romansh. With only 37,000 speakers, it is the language with the fewest speakers in Switzerland.

We translate many types of materials for our Swiss clients. This includes translation of websites and web content, legal documents, medical reports and material, technical manuals, financial and business documents.