In addition to the 144 million Russian speakers living within Russia itself, Russian is also widely used throughout much of the former Soviet Union, including Ukraine and many Eurasian countries such as Kazakhstan. This makes it the largest native language in Europe and the eighth most spoken in the world.

This broad, diverse audience is spread out across a vast region that is home to many different important business sectors, including oil, natural gas, and precious metals.

Major Russian-speaking cities like Moscow and St. Petersburg are home to vibrant, lively cultural scenes. Their residents are cosmopolitan and outward facing, creating an important market for any company looking to cement their reputation as an international brand. 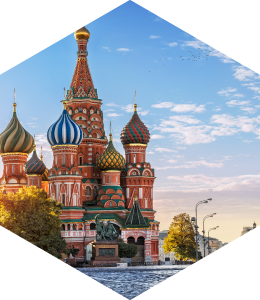 We have been delivering high quality business-to-business translation services in over 250 language combinations for over 10 years. With a wide resource of specialist translators and account managers, we will ensure your translation project is handled with the commitment to quality and accuracy it deserves, no matter the lead time, the format, or the number of languages.

All services are delivered by professional and qualified linguists and experienced UK based account managers so you can be sure your translation project is in safe hands and managed in the best way possible.